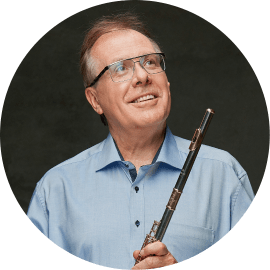 Carlo Jans began his first flute lessons at the age of seven. On the completion of his training in Luxembourg and Nancy (class of Jacques Mule), he continued studies at the Conservatoire Royal de Liège, (Diplôme Supérieur de flûte). Being a student of Raymond Guiot, he was honoured with the "1.Prix Supérieur de la Ville de Paris". He completed a two years postgraduate program at the Cologne Academy of Music in the Masterclass of Andràs Adorjàn, and took private lessons with the great master Aurèle Nicolet.

Open to new musical horizons, Jans studied conducting under Jan Stulen and Jean-Philippe Rieu at the Royal Music Academy of Music in Maastricht (Conducting Diploma with honours), followed by a Postgraduate Diploma at the "Zuid Nederlandse Hogeschool voor Muziek". Further conducting studies with Jorma Panula in St.Petersbourg. Carlo Jans finished his studies with a “Doctor in Arts” at the Academy of Music in Lodz (Poland).

Since 1984, Carlo Jans has taught flute and chamber music at the Conservatory of Luxembourg, In 1999, he was awarded a professorship for flute and conducting, thus beginning leading the orchestras of conservatory. He is often invited for masterclasses in the Netherlands, France, Belgium, Latvia, Germany, Greece, Poland, Czech Republic, France, Brazil, United States of America, Japan, China and Russia.

From September 2002 to 2009, Carlo Jans was teaching at the Musikhochschule Saarbrücken in Germany, activity he was obliged to give up because of the increasing number of concerts as soloist and invitations to teach all over the world.

From 2009 on, Carlo Jans has been a member of the world known chamber orchestra “Solistes Européens – Luxembourg”, orchestra made up of Concertmasters and soloists from the best European Orchestras.

Numerous composers have written solo, chamber music and concertos for him, for example, Marcel Wengler, whose concerto for flute and orchestra was first performed in the ISCM World Music Days in 2000 together with the Swiss Chamber Orchestra. Czech composer Jindrich Feld, whose concertos Carlo Jans recorded with the Prague Radio Symphony orchestra for Pavane Records, and whose chamber music for flute will come out soon in a 3 CD set, wrote for Carlo Jans and his Czech colleagues Jitka Hosprova and Katerina Englichova a "Musique concertante" for flute, viola, harp and strings. His discography (over 50 CDs) for labels like Pavane Records, Calliope, Arco Diva, Bella Musica and Hänsler Classics have earned him outstanding reviews in the international press and awards such as the "Grand Prix du Disque" for his recording of the chamber music of Manuel Rosenthal.